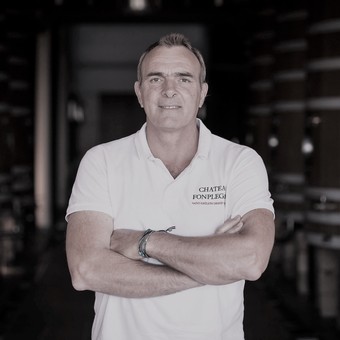 Arnaud Martin grew up in the famous wine region of Sancerre, and pursued a career in carpentry before joining the army at the age of 18. It was there that fate intervened and he met the passionate Sancerre winemaker Alphonse Mellot. In 1990, he began working with Alphonse as his assistant winemaker, and quickly rose to become his cellar master. Arnaud moved to the Bordeaux area in 1997 and spent the next decade working as cellar master for Marie-Antoinette Janoueix, managing more than seven different wine estates.  Always looking to take on new challenges, Arnaud went on to manage several wine properties in Lebanon and Syria, then returned to Bordeaux in 2010 to become the technical director for Château Puy Mouton and Château de Faise.

Arnaud found a home with the Fonplégade family in 2015 as the technical and vineyard manager for Château Fonplégade and Château l'Enclos. Since then, he has worked daily with our team to create exceptional wines from both estates.